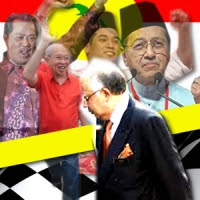 Next person to lead UMNO
Words are going round asking, “Who is the Prime Minister now? Najib or Mahathir?” Most people already have a vague answer to this question, for now. Najib to the masses has been implicated time and again for being a puny jouster and fingers are pointing at Mahathir who is pulling the string. But Najib is Mahathir’s choice after Abdullah. Indeed, Mahathir should have first tutored Najib to be a ‘fighter’ before the latter could be put on the altar. Mahathir was in a haste to push Abdullah out of the scene and thus the appointment of Najib as PM.
Mahathir will keep Najib on his toes until the next general election. Najib realises that if he decides not to listen to the ‘self-appointed advisor’ to him, he will be in trouble. This is the least that he wants to face before the next general election. But if he keeps on listening to Mahathir, his political nemeses will brand him as a PM without his own stand.
If UMNO and BN fail in the next general election – which is more likely, Mahathir will call for Najib’s resignation as prime minister like what he did to Abdullah at one time. Hope Mahathir lives long to see the fate of Najib after the next general election. Mahathir can, after that, decide who should be the next person to lead UMNO.
Written by  Moaz Nair, Malaysia Chronicle
Posted by Unknown at 12:48 PM