One wonders if Mahathir and Lee Kuan Yew share the same philosophy. The Ultra Malay Mahathir and Radical Chinese Lee are almost always at odds with one another. From politics to policies, there seems to be infinite issues for them to brawl over and, even if there are none, they can’t seem to help pulling a mickey out of one another. But read between the lines and you will realize that they share the same philosophy – the same reductionist philosophy that subjugated the region into chains of colonization in the past. 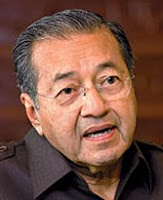 But before going into the shared philosophy espoused by these leaders, it helps to first understand how a reductionist view on any subject would eventually lead to the perversion of an original idea. An idea or perception of a matter or subject is defined based on the senses and on our analytic thought. That, infused with cultural surroundings and historical impact produces the eventual paradigm in which we live.
Now, that’s not very hard to follow, is it? However, no matter how accurate one’s senses in perceiving a subject, an observer with a reductionist view tries to simplify things by creating faulty arguments and slippery judgments.
Thus, when it comes to formulating a policy, a reductionist approach is, at best, dangerous on many levels. Firstly, a reductionist may not solve the problem at hand but instead exacerbate it by not fully understanding the mechanism in the first place. In other words, a reductionist would rush to ‘fix’ the problem based on first impressions, hence neglecting the intricacies of the initial problem.
Secondly, even if the problem is solved, it will leave an aftertaste of resentment as its early mechanism was forcibly changed in order to facilitate its new functions. This “machinery” is forced to function based on the whims of the reductionist, rather than working naturally based on its mechanics.
On a third level, a reductionist distorts an original idea by implementing the interpretation of the idea into a form either unfounded or too extreme in the earlier idea. This is because the reductionist digests the original idea only in its cosmetics instead of understanding the whole dynamics and principles of the idea. For example, such a view of sociology gave birth to Communism; a reductionist view of biology gave birth to Nazism, and a reductionist view of Islam gave birth to Islamic terrorism.
The same can be said about both Mahathir and Lee Kuan Yew.
In his book The Malay Dilemma, Mahathir espoused the view that Malays – particularly the rural ones whom he characterized as less competitive compared to the urban and racially mixed Malays – were somewhat lacking in intelligence as compared to others.
By others, I refer to the Chinese, Indians, and Malays of racially mixed background. Therefore, in his assessment an open and competitive market environment would actually cause the Malays to be weaker than permitted by status quo.
Mahathir may have written The Malay Dilemma in the early years of his entry into politics, but his view remains unchanged. An example can be his recent comments – especially with regards to Premier Najib Razak’s drive to promote meritocracy – as a clear sign that he has yet to ditch his post-colonialist belief in social anthropology (which ascribes to the idea that certain races are born superior than others). Does Mahathir believe pure-blooded Malays to be superior to other races?
No. In fact, he believed that pure-blooded Malays are somewhat incompetent when it comes to competition with other races. It was thus written in his book, and reiterated during his post-retirement era where he concluded that meritocracy would benefit only certain races, as compared to affirmative action which, in his opinion, would level the playing field for everyone. In his paradigm, to which I believe and presume many UMNO Old Guards still adhere, affirmative action is a must to ensure all races be able to stand together and fairly reap the nation’s economical benefits.

In Lee Kuan Yew’s Hard Truth, the Singaporean Lion mentions that the Chinese people are resilient because they practiced, in the past, the law of ‘survival of the fittest’, where ‘the poor can’t get married and breed, while the smart and rich are able to breed’, thus eliminating the ‘bad genes’.
He also concludes that the modern Chinese are thus resilient and smarter, as both traits are genetically and culturally inherent. Lee also mentions his loathing for liberal democracies, as they tend ‘to believe that all people are born equal’.
With all due respect to Mr Lee, I think he may have taken too literally the egalitarian principles of liberal democracies, instead of having it as a mere guiding principle. But that’s for another discussion.
As for Mr Lee, his generalization of race (in which ethnic groups in China have different, region-based history, is forgotten) and his implicit belief that some races are born superior than others come to prove that his mentality is along the lines of the colonialists whom he and Mahathir both replaced.
However, in contrast to Mahathir’s view, Lee believes affirmative action to be detrimental towards the more “superior race” as they are forced to accommodate to the more “inferior” ones.
Eerily, many of us still adhere to both of these mutually exclusive paradigms. In fact, I believe that they have made their  mark on both countries’ societies, especially with regards to  the Sino-Malay relationship. This has formed a bulwark to a dynamic relationship between the two races.
Frankly, however, both their judgments and flow of thought are, well, flawed. Firstly, having the self-belief of superiority to judge people based on race has shifted their attention away from the illness affecting a section of the population.
By generalizing a certain problem to a particular race, one does not solve the problem at all as the remedy is not solving the cause of the problem. Rather, the focus has turned on the symptoms of the illness instead of its cause.
In this regard, Lee Kuan Yew is less guilty in the trajectory of this mindset in his administration. As for Mahathir, the affirmative action policy was already taking place when he came into power, thus giving him more impetus in administering it based on the post-colonial mindset.
The economic strength and growth in the early 90’s may perhaps have dulled the people’s mindset from reacting towards such a denigration of thought. Economic success, in most cases, is defined as the wisdom and ingenuity of the leader.
Both countries grew and grew while harbouring the post-colonial philosophy, which reared its head after various economic downturns. In other words, Malaysia and Singapore are merely growing shells, with no input of philosophical glue to actually coalesce the people together. The unity dances, songs and cultural festivals are merely facades. The ruling government decides how the races should interact. That’s a subtle line that both governments have failed to see.
In the Myth of the Lazy Native, Syed Hussein Al Attas hampered the thoughts harbored by the Western imperialists towards the natives.
He motioned that the Western combination of fantasy, prejudice and refined scholarship gave basis to imperialism, whereby “[t]he image of the indolent, dull, backward and treacherous native has changed into that of a dependent one requiring assistance to climb the ladder of progress”.
Hussein denounces the belief that the natives, i.e. the Malay, require constant assistance in order for them to be successful and civilized.  According to him, it was predicaments, history, location and time which shaped the people’s mindset. And unlike the Western Imperialist, Mahathir and Lee Kuan Yew, Hussein believes that the resilience and intelligence of a race is very much formed by its surroundings instead of by inherent qualities.
This belief made its way into the early Gerakan Party that championed racial equality and a dynamic modern socialism approach.
Mahathir and Lee Kuan Yew may have been successful in managing their respective country, but the philosophy in which the countries were managed were only ‘good while they lasted’. The current threat to our joint 1culture, politics and dynamics rests on the development of a reformed philosophy and an ever-shifting paradigm. And the time for a major paradigm shift happens now.
It is somewhat apparent as to why liberal democracy may not be able to blossom any time soon within this region. What with most of the top echelons within the two countries still harbouring the belief that they know more than the others, and thus can decide on how to deal, interact and administer the populace.
The worse part is that the view is implicitly shared by a large part of the populace. For a liberal democracy to bloom, the people would need a substantial amount of confidence, as well as more depth within their frame of mind to be able to harmonize in forming a functioning society. Hence, both governments have a large burden in educating the people on civil rights and social responsibility, along with managing their current development policies.
The time has come for the governments of this region to give birth to a new dynamic society, one that subscribes to a philosophy that is both progressive yet localized in its expression of culture – a brand of philosophy that may have had its origins in the centre-left movement of the 60’s, but gravely relevant to the present day.
‘The Myth of the Lazy Native should be reviewed in more recent and relevant terms. The myth is no longer true in the eyes of former colonial masters, but is sadly seen as fact by local leaders.
Posted by Unknown at 3:25 PM