Here’s a golden opportunity to hear at first hand from Abang Mat Sabu, who has had the courage to lay bare the lies perpetrated by UMNO that they were the only ones who gained Merdeka for Malaya . 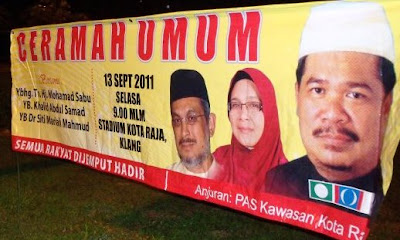 The venue is the main Klang Stadium (Stadium Kota Raja) near the railway station.
His remarks at a ceramah in Tasek Glugor, Penang, on 21 August, had UMNO caught up for 6 days as they huddled to decide how to deal with the revelation that there were other Malays who were the first to raise the rally cry of MERDEKA, such as PKMM (Partai Kebangsaan Melaya Malaya – Malay National Party) in 1945.  And there were those Malays who paid the supreme sacrifice by opposing British colonialism, such as Mat Indera.
Their frenzied attacks were unleashed on 27 August, raising the communist bogey once again, but Abang Mat deftly countered on 6 Sep by showing a book sanctioned by no less than Johor UMNO stalwarts which portrayed Mat Indera as a freedom fighter.
Arising out of the issue, other forgotten names like Dr. Burhanuddin al-Helmy, Ahmad Boestamam, Pak Sako, Shamsiah Fakeh, Rashid Maidin, Abdullah C.D. suddenly were thrust unto the national psyche of new generations of Malaysians who had these names perniciously obliterated from the official history texts.
Thrown into the alphabet soup were political organisations like PKMM, API, AWAS, BATAS, PUTERA, AMCJA, MDU, PMFTU whose leaders realised the imperative of uniting the rakyat of all races and religions to demand for MERDEKA from British rule, culminating in the historic 1947 PUTERA-AMCJA conference which presented the PEOPLE’S CONSTITUTION.
The issue has already spawned two public forums in the Klang Valley , one in the KL & Selangor Chinese Assembly Hall on 9 Sep, and the second one this Thursday 15 Sep by civic society in the PJ Civic Hall.
A debt of gratitude is owed to Abang Mat for daring to expose the dishonesty of UMNO in claiming exclusive ownership of our independence struggle.  He has opened our eyes to have a re-look at our history and to correct the distortions purposely created to deceive us and to legitimise the handing over of neo-colonialist power to those who were willing to cater for British economic interests.
Posted by Unknown at 4:00 PM